Originally the center of one of Dallas’ first upscale master-planned communities, the neighborhood fell into economic decline as middle-class residents fled to the suburbs during the last half of the 20th century. Fortunately, reinvestment over the last 20 years has transformed North Oak Cliff into a trendy home base for young “urban pioneers” drawn to life in updated old houses set among the slew of new restaurants, bars, entertainment venues, and shops. 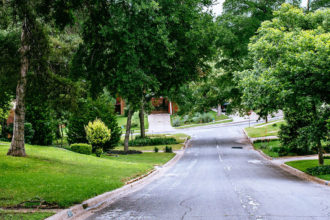 The diversity of the community. The offerings of the long-established Hispanic-owned businesses along Jefferson Boulevard are as valued as are the hip spots along Davis Street that often fill with visitors from the other side of the Trinity River.

About the neighborhood’s growing reputation as a “hipster” haven and being called “Dallas’ Brooklyn” because of the (admittedly common) preferences of new residents for walkable environments and locally sourced, organic fare.

The Bishops Arts District and the surrounding blocks have become a true Dallas dining destination. It’s a great place to visit — provided you can find parking.

The Texas Theatre, most famous worldwide as the place where Lee Harvey Oswald hid out after (allegedly?) shooting President John F. Kennedy, now boasts the most unique cinematic programming in the city. Music and comedy shows, as well as a surprisingly inviting bar, are also draws to the historic venue.

The average household size is 3.09.

The average commute time for workers who live in this area is 30.0 minutes. The average number of vehicles per household is 1.7.

50.5% of the homes are owner-occupied. The average length of residence among residents in owner-occupied homes is 17.2 years, while the average renter has been in the same home 7.1 years.

The median year the area’s housing units were built is 1954.

Throughout thosebeats during 2014, there were: